How many people in world lives in forest ? 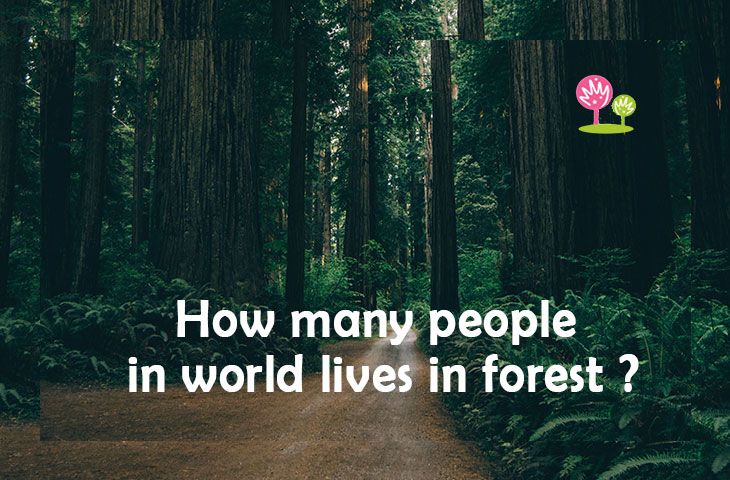 Lost in the forest, I broke off a dark twig

and lifted its whisper to my thirsty lips:

maybe it was the voice of the rain crying,

a cracked bell, or a torn heart.

This is the lines from famous poem “Lost in the forest” By Pablo Neruda.  Did you ever seen the beauty of the forest ? If not once you have to. We all know that forests primarily act as the oxygen cylinder for environment. Not only that but also there are another mind blowing facts about forests.

70% of the world’s animals depends on forests for their homes.

More than 25% of the medicines we use originate in rainforests plants.

A man from India started planting trees when he was 16-years-old. He’s 47 now and lives in his own forest with rhinos, tigers and elephants.

In Japan, doctors would prescribe “Forest therapy” to treat depression and anxiety.

20% of the Earth’s oxygen is produced by Amazon Forest.

About 80% of the Earth’s original forests have been cleared or destroyed.

More than 300 million people live in the forest.

The largest area of forest in the tropics remain the Amazon Basin, amounting to 81.5 million acres.

One of the reasons your lungs feel refreshed when walking through a pine forest is because of an anti-inflammatory compound called a-Pinene, found in conifers.

There is an ancient old growth forest bordering Poland called Białowieża Forest. It resembles what most of Europe looked like before the 14th century. This story of conservation has been well documented over the last 500 years and is almost as rich as the ecosystem the forest supports.

California uses inmates to fight forest fires. Prisoners take the jobs because it reduces their sentence, gets them outside, and pays better than typical prison jobs.

Peter Mayhew (Chewbacca) was required to be accompanied by crewmembers who wore brightly-colored vests while in the forests of the Pacific Northwest filming scenes set on Endor, so as not to be mistaken for Bigfoot and shot.

A formation of larch trees in the shape of a swastika was discovered in Germany in 1992. The formation, only visible in the fall, went unnoticed for 60 years. After that discovery, other forest swastikas were found in Germany and beyond.

A man called Jadav Payeng single-handedly planted a forest bigger than Central Park to save Majuli Island in Northern India from erosion. The forest is now home to large amounts of stray wildlife.

One of the reasons your lungs feel refreshed when walking through a pine forest is because of an anti-inflammatory compound called a-Pinene, found in conifers. It is used as a bronchodilator in the treatment of asthma and abundantly present in marijuana.